As we know a digitized image is represented in a computer as an array of two-dimensional pixels. A pixel is the smallest unit inside an image that can be uniquely captured using the camera. The number of pixels in an image depends on the resolution capacity of the camera. In a grayscale image, each pixel corresponds to the intensity level in that particular pixel and its value ranges from zero to 255. In color images, each pixel has red, green, and blue color levels with values ranging from zero to 255. Theoretically, a mixture of these three colors can generate any visually identifiable colors of human perception.

In edge detection, our aim is to identify portions of the image where information is densely populated. This means we are interested in identifying those pixels which form edges in an image. Edges in the image are identified by comparing them with the pixel intensity of neighboring pixels. Larger the difference or variation in brightness of pixel values, the larger the likelihood that it is an edge pixel. Therefore our interest is to identify those pixels which significantly differ from their neighboring pixels.

The application of calculus comes into play here. We know that calculus is the study of change just like geometry is the study of shapes. Assuming that the pixel values in an image form a discrete function, our aim is to find the points in the discrete function whose slope is higher. Since an image is a 2-D function, operators describing edges can be expressed by using partial differential equations. The points that lie on an edge can be detected by detecting the local maxima or minima of the first derivative or by detecting zero-crossing of the second derivative. The idea is described in figure (1) for 1-D analysis. However, since noise in an image often forms pseudo-edges we have to pre-process the image. Therefore edge detection can be described in four steps as below.

(a)   Smoothing – to reduce noise without destroying true edges
(b)   Enhancement – improve the quality of the edges (eg. by improving sharpness)
(c)   Detection: find the edge pixels
(d)   Localization: find the exact location of the edge. (eg. linking edges together) 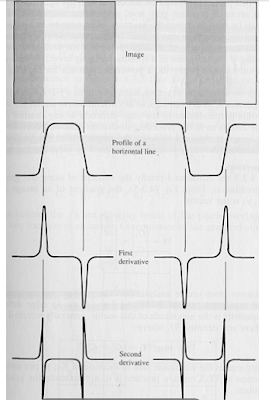 Figure (1) - Idea of edge detection in 1-D intensity signal function. Changes in edge can be detected using local maxima or minima of the first derivative or using the zero-crossing in the second derivative. (Source here)

The magnitude of the gradient is calculated using the resultant formula:

The direction is calculated by using the inverse tangent of the gradients in each direction. 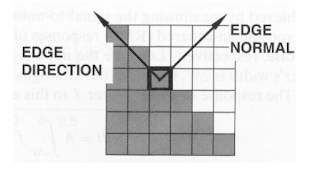 Some of the results of applying the Sobel operator in grayscale images and color images are shown below. In color images, we compute the intensity and use it for edge detection.

After computing the edges, thresholding is applied to highlight edges that are highly likely. Again we can highlight those edges which are in a particular direction by thresholding edge intensity image using computed direction information. 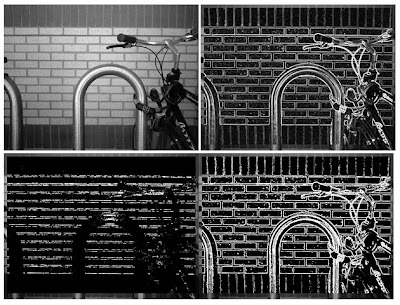 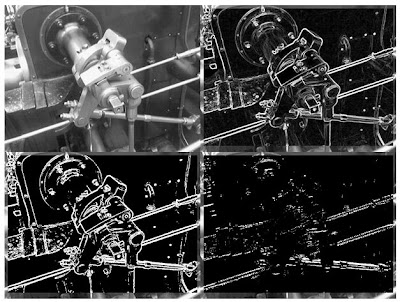 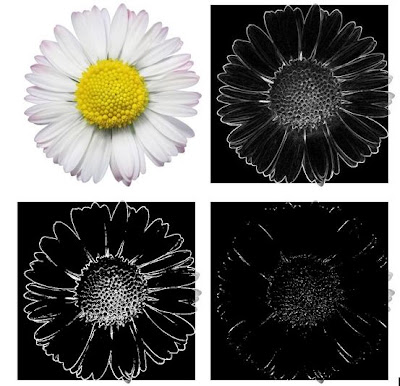 Circle detection in image processing is done using Hough transform. Hough transform is a feature extraction technique to find imperfect instances of objects within a certain class or shape. This is done by parameterization and then voting the parameter space to find local maxima. First, we compute the edges of the image using edge detection. Then we threshold the edge image so that we can find significant edges. Now we have to find those edges which form a circle. Note that after edge detection circumference of the circles might not be connected clearly. So we apply Hough transform.

A circle can be described completely with three pieces of information: the center (a, b) and the radius R.

When the θ varies from 0 to 360, a complete circle of radius R is generated. We note that for a circle the parameters (a, b, R) are constant. In the parameter space, we plot the coordinates with (a, b) boundary equivalent to the set of all possible centers in a given image where θ ranges from 0 to 360. For each edge point that correspond to (x, y, R) of a particular circle in real space we draw the sphere in the corresponding (a, b, R) parameter space. If we are looking for circles of a particular radius R then we have a 2D parameter space.

Rearranging the equations we get 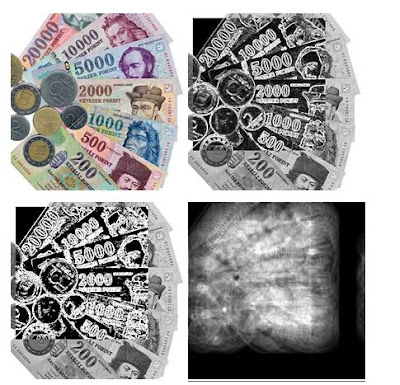 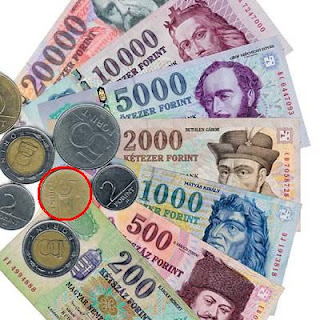 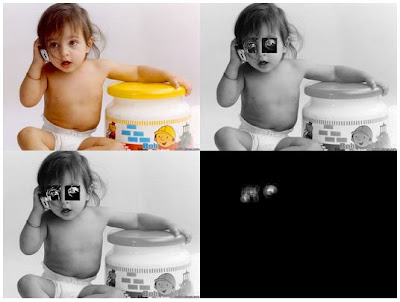 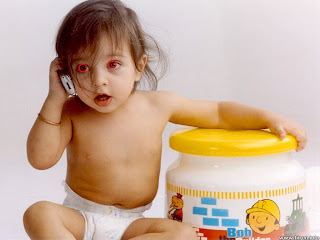 
I have included sample code in c++ for edge detection and Hough transform. Code for classes ROI, Images are excluded.

I posted my code used in this article in Git.

Posted by Jehonathan Thomas at 9:03 AM No comments: